Home › The Claims of Jesus › Jesus is God › How Father, Son, and Spirit, Can Be: One God

How Father, Son, and Spirit, Can Be: One God

I am not sure why someone needs to see the words Trinity or Rapture in order to believe that these principles are found in the Bible. The word “Grandfather” is also not found in the Bible, but we see examples of many grandfathers in the scriptures.

One God, revealed as three Persons

When we see Jesus the Son at the Jordan river, the Holy Spirit descending upon the Him in the form of a Dove, and the voice of the Father speaking from Heaven: This is my beloved Son, in whom I am well pleased, what else would we refer to these three as, but a Trinity?[1]

The word Trinity means three-in-one.[2] The Bible clearly teaches that the Father is God, the Son is God, and the Holy Spirit is God; and these three are One God.[3] Whether or not we can comprehend such a concept with our limited human minds, is irrelevant. The fact remains: this is the truth as it is declared in the Bible.

The Father:
2 Peter 1:17 For He received from God the Father honor and glory when such a voice came to Him from the Excellent Glory: “This is My beloved Son, in whom I am well pleased.”

The Son:
Hebrews 1:8 But to the Son He says:“Your throne, O God, is forever and ever

The Spirit:
Acts 5:3-4 But Peter said, “Ananias, why has Satan filled your heart to lie to the Holy Spirit and keep back part of the price of the land for yourself? While it remained, was it not your own? And after it was sold, was it not in your own control? Why have you conceived this thing in your heart? You have not lied to men but to God.”

These three are separate, distinct and appear all together at the same time, working together for the same purpose.

Matthew 3:16-17 When He had been baptized, Jesus came up immediately from the water; and behold, the heavens were opened to Him, and He saw the Spirit of God descending like a dove and alighting upon Him. And suddenly a voice came from heaven, saying, “This is My beloved Son, in whom I am well pleased.”

Once again: We have Jesus at the Jordan river, the Holy Spirit descending upon Him, and the Father speaking to the Son from heaven. The three members of the Trinity or Godhead are all separate, yet together at the same moment in time.

It is difficult for our human mind to comprehend how three can be one. If they are all equal in power and authority, are they not three Gods? It should come as no surprise to us that this is true. An eternal and unlimited God would be impossible to fully comprehend by any transient human being.

Romans 11:33 Oh, the depth of the riches both of the wisdom and knowledge of God! How unsearchable are His judgments and His ways past finding out!

The true definition of One God

The answer to this important question (how can three be one?), is found in the definition of what constitutes “One.” These three amazing beings, although they are different and distinct from each other, are One in unity. They are so closely linked together in their agreement over everything, they are really just One. Their complete unity in all things, while still being distinct persons, is what makes them one God.

In the same way that a human being is a body, soul, and spirit, but these three comprise just one person. All three work together in perfect unity to make the existence of a single human being possible.

In John Chapter 17, we see a hint of this single-mindedness that allows the Father, Son and Holy Spirit to be One God. If we study carefully the words that Jesus speaks to the Father, we can see that they are in total agreement over everything. Jesus often describes their relationship as simply: One. This single mind, single will, is the reason that these three are One God. Without this complete unity in all things, they would just be three Gods performing their own independent desires.

John 17:1-26
Jesus spoke these words, lifted up His eyes to heaven, and said: “Father, the hour has come. Glorify Your Son, that Your Son also may glorify You, as You have given Him authority over all flesh, that He should give eternal life to as many as You have given Him. And this is eternal life, that they may know You, the only true God, and Jesus Christ whom You have sent. I have glorified You on the earth. I have finished the work which You have given Me to do. And now, O Father, glorify Me together with Yourself, with the glory which I had with You before the world was.”

“And all Mine are Yours, and Yours are Mine, and I am glorified in them.  Now I am no longer in the world, but these are in the world, and I come to You. Holy Father, keep through Your name those whom You have given Me, that they may be one as We are.”

“I do not pray for these alone, but also for those who will believe in Me through their word; that they all may be one, as You, Father, are in Me, and I in You; that they also may be one in Us, that the world may believe that You sent Me. And the glory which You gave Me I have given them, that they may be one just as We are one: I in them, and You in Me; that they may be made perfect in one, and that the world may know that You have sent Me, and have loved them as You have loved Me.”

“Father, I desire that they also whom You gave Me may be with Me where I am, that they may behold My glory which You have given Me; for You loved Me before the foundation of the world.  O righteous Father! The world has not known You, but I have known You; and these have known that You sent Me. And I have declared to them Your name, and will declare it, that the love with which You loved Me may be in them, and I in them.”

We observe not three persons—each with a separate volition, but one will, one mind, one purpose. All three of the Trinity have the same explicit determination in all things. There is no fraction of turning or minute difference of desire—they are one in everything, and have apparently done so—forever; this is why they are called “One God.”

It is their unity of mind and purpose that makes these three: One.

When John was transported to heaven, in Revelation Chapter 4, he saw One who sat on the throne of God.

Revelation 4:1-2 After these things I looked, and behold, a door standing open in heaven. And the first voice which I heard was like a trumpet speaking with me, saying, “Come up here, and I will show you things which must take place after this.” Immediately I was in the Spirit; and behold, a throne set in heaven, and One sat on the throne.

As John looks at the one throne of God, he sees a scroll in the right hand of Him who sat on the throne. From the midst of the throne, came a Lamb as though it had been slain; then John saw the Seven Spirits of God.

Jesus did not come from a separate place, but from within the other two.

We have a single throne in heaven, with the Father sitting on the throne, the Son coming from the midst of the Father, and the Spirit residing within both. 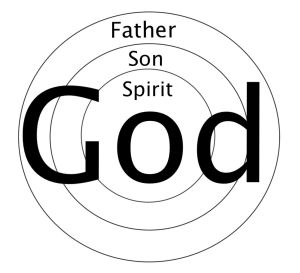 Revelation 5:1,6 And I saw in the right hand of Him who sat on the throne a scroll written inside and on the back, sealed with seven seals. And I looked, and behold, in the midst of the throne and of the four living creatures, and in the midst of the elders, stood a Lamb as though it had been slain, having seven horns and seven eyes, which are the seven Spirits of God sent out into all the earth.

The Son comes and takes the scroll out of the hand of the Father.

Revelation 5:7 Then He came and took the scroll out of the right hand of Him who sat on the throne.

We see from this example that there is One throne in heaven, with the three members of the Trinity working together as One, for a common will and purpose. Because the three operate as One, they are described as One God.

In this 161st Old Testament Prophecy from Isaiah 6:1-3, we see the coming Messiah already in heaven as God, with the Father and the Spirit. The same Lord whom Isaiah saw on the throne in heaven is the Lord Jesus Christ that we are introduced to in the New Testament. This Trinity of God is the same trio that we see in the fulfillment of this prophecy in the New Testament, when Jesus is baptized at the Jordan river. Isaiah refers to the One God as Holy, Holy, Holy, an intentional Trinity of praise for one God who is manifested as three persons.

For a detailed study on the subject of the Trinity, see the chapter in this book: One God, Three Persons.

‹ Israel: What More Could God Do?
It is Hard to be an Atheist ›

Tags: How three persons are one God, The Father, The Holy Spirit, The Lamb, The Seven Spirits, The Son, The Throne of God, The Trinity, The unity of God