The Uniqueness Of Jesus

What standard of judgment are you using to determine who Jesus is?

Given that history records the presence of Jesus on earth, performing works that no other man has ever done, we should give careful examination of these facts. Given that Jesus claimed to be God and the Jews picked up stones to kill Him because He claimed to be God, we would be wise to investigate why an ordinary man would make such claims.

This is particularly true when we consider how good Jesus was in all His behavior. There is no record of Jesus ever committing any sin. The men who had been with Jesus for three years said that they had never seen or heard Him sin. How could a good and sinless man claim to be God if He is, in fact, lying?

The leaders of the Sanhedrin in Israel incorrectly identified Jesus as coming out of Galilee when He was actually born in Bethlehem. These men quickly assumed that Jesus was born in Nazareth and stated that no prophet ever came from the region of Galilee. In their minds this meant that Jesus could not be the Messiah. When we do our own investigation of the facts we find that Jonah came from Galilee and he is a prophet. In fact, Jesus referred to Jonah as an example of what He was seeking to accomplish in His work on earth.

If the Religious leaders of of Israel can make a careless determination for who Jesus is and be wrong, then it is possible for any Jew living today to make the same mistake.

The Atheist who states that Jesus is not a real person from history or that they have seen no evidence for the existence of God, makes a similar error concerning Jesus.

When we examine the narrative of Jesus that has survived 2,000 years of time and decay, we find that there is a massive amount of evidence to support the authenticity of the four Gospels. After Jesus said and did the things that are records in the New Testament a massive writing frenzy began that resulted in nearly 25,000 ancient manuscript copies of the original accounts of Jesus life, death, and resurrection.

Today we have a copy of Matthew’s original manuscript that is dated to just 28 years after Jesus’ death, written by Matthew himself while he was still alive. This is a photo of this manuscript: See the chapter: “Scourged” 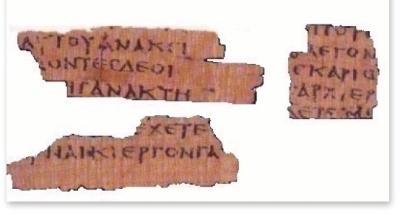 Think about this for just a moment. If Jesus is a myth and all of the stories that are written about Him in the New Testament are not true, why did so many people copy and distribute such a great number of the four gospels to people all over the world? It is a known principle of history that untrue events and account of non existent persons never survive the harsh judgment of history. All legends and myths that are known today, were known as myths and legends during the time they were written.

If the accounts of Jesus were not true, the people that were closer to the time when these things were written would have been in a much better position than we are today to determine whether Jesus was a myth and the things written about Him were false. What we find instead is that the people who were able to determine whether Jesus raised Lazarus from the dead, opened the eyes of the blind, and caused a man born paralyzed to walk, confirmed these events as true. The proof of this fact is the continual copying and distribution of these accounts of Jesus, all over the world. Not one document exists today from the first century which refutes or impeaches the events that are recorded about Jesus.

The facts are: we do not have a single, credible, impeachable document, from the first century which describes the four gospel accounts of Jesus’ resurrection as erroneous or unreliable. As a matter of history, the early church fathers themselves wrote extensively, quoting many of the texts from these first copies, authoring several commentaries and instructions to the church—from these early texts. Polycarp and Papias were both disciples of the Apostle John, and had firsthand knowledge of John’s eyewitness account of Jesus’ death and resurrection.

Before the canonization of the New Testament, there were some 30 gospels of Jesus Christ that were under careful consideration. All but Matthew, Mark, Luke, and John, which are a part of our New Testament today, were excluded—after having been examined thoroughly for accuracy and authenticity.

If we think that Jesus was not capable of performing the miracles that are ascribed to Him in the New Testament, we must answer how is is that the Old Testament prophets wrote hundreds or thousands of years in advance that Messiah would open the eyes of the blind, heal the paralyzed, and raise the dead. If we try to disqualify Jesus and the New Testament because of the supernatural descriptions ascribed to Jesus then we must also disqualify the entire body of Hebrew scriptures because they also predict Messiah will do exactly what is described of Jesus in the four Gospels.

In order to believe that both the Old and New Testaments are lying, we would have to believe that 40 authors, over a period of 1,500 years, conspired together across the expanse of history, to deceive the world.

You can see how utterly foolish it is to ignore what is written about Jesus and cast Him aside as the leaders of Israel did when He appeared before them.

When we consider who Jesus really is, we begin to understand why He was exclusively chosen as the redeemer of mankind. To understand that this Eternal Being who created the universe and all it contains, was willing to suffer unimaginable torture so that we might have to opportunity to live forever, we are awestruck.

The following 181 chapters demonstrate the unique attributes of Jesus and set Him apart as the only One who Is truly qualified to be the Messiah, the Savior of the world.

An Acceptable Time
A Forerunner
Two Servants
Two Arrivals
Born in Bethlehem
Ruler and King
Beginning in Galilee
Arriving at Jerusalem
Arriving on One Day
Revealed at Jerusalem
Proclaimed as King
Bringing Good News
Bringing Salvation
Fulness of the Spirit
Suddenly at the Temple
Cleansing the Temple
Coming as God
Coming as a Shepherd
Coming as a Teacher
Coming Humbly
Coming as a Servant
Coming With Gentleness
Coming in Peace
Coming With Compassion
Coming With Justice
Coming With Salvation
Coming to Open Eyes
Coming to Heal
Coming With Authority
Releasing Prisoners
Teaching by Parables
To Clarify God’s Law
One God, One Way
The Holy Spirit, The Church
Who Will Believe It?

I AM
God
Creator
The Savior
Son of God
LORD
A Trinity
A Body Prepared
Virgin Birth
Abraham’s Son
Shiloh
Passover Lamb
The Rock
Serpent on a Pole
A Prophet Like Moses
Kinsman Redeemer
David’s Son
The Branch
A Tabernacle, a Sanctuary
King of Kings
Humble
Anointed With Joy
Prophet, Priest, and King
Yinnon
Firstborn
Good
Holy
Son and Lord
A Priest Like Melchizedek
The Cornerstone
Rejected By Israel
God With Us
Stumbling Stone
A Human Being
A Child
A Son
Wonderful
Counselor
Mighty God
Everlasting Father
Prince of Peace
Righteous Judge
Precious Cornerstone
First and Last
The Lamb
Sin Bearer
Intercessor
Manner of Prayer
Faithful
Our Righteousness

The Preceding List Is From The Book: “These Things Were Written: An Expositional Treatise Of The Life, Death, And Resurrection Of Jesus.”