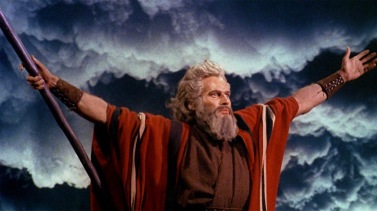 Moses From The 10 Commandments

One of the often-quoted texts from the Hebrew scriptures, regarding the Messiah, is the fact that when He comes, He will be a Prophet like Moses. When Jesus confronts the Pharisees and leaders of Israel with their blindness—failing to recognize His true identity—He not only tells them that their inability to recognize Him will cause the loss of their nation, but that He is the prophet whom Moses wrote about. The Jews placed great importance on Moses and the law he brought to Israel. These men were looking for a deliverer like Moses who subdued Pharaoh and set the entire nation free. Moses did not say that the Messiah would be a prophet just like him, but only that He would resemble Moses and what he accomplished.

This is a common problem amongst many people. We anticipate what we think God is going to do. When He does not meet our expectations, we miss the fact that He has visited us and worked in our life.

Jesus came as a deliver; but on His first arrival, the deliverance He brought was from sin. On Jesus’ second appearance on the earth, He will set God’s people free from the evil of this world and set up a righteous kingdom that will never end.

“The LORD your God will raise up for you a Prophet like me from your midst, from your brethren. Him you shall hear.”[1]

Moses was a savior and deliverer of God’s people. He acted as an intermediary between God and man.

Jesus is that Prophet:

Then those men, when they had seen the sign that Jesus did, said, “This is truly the Prophet who is to come into the world.”[2]

And that He may send Jesus Christ, who was preached to you before, whom heaven must receive until the times of restoration of all things, which God has spoken by the mouth of all His holy prophets since the world began. For Moses truly said to the fathers, “The LORD your God will raise up for you a Prophet like me from your brethren. Him you shall hear in all things, whatever He says to you. And it shall be that every soul who will not hear that Prophet shall be utterly destroyed from among the people.”[3]

The Apostles, who were eyewitnesses of all Jesus had said and done, believed that He was the Prophet whom Moses spoke of and the fulfillment of his prophecy, in Deuteronomy 18:15.

At the beginning of Jesus’ ministry however, there was some confusion amongst the leaders of Israel and those who witnessed John the Baptist’s teaching as to whether or not John was the Prophet whom Moses spoke of.

Now this is the testimony of John, when the Jews sent priests and Levites from Jerusalem to ask him, “Who are you?” He confessed, and did not deny, but confessed, “I am not the Christ.” And they asked him, “What then? Are you Elijah?”  He said, “I am not.” “Are you the Prophet?” And he answered, “No.”[4]

The people were expecting the coming of the Messiah during the time when John was baptizing at the Jordan river. Because of the boldness of John and his call to repentance from sin, the people thought that perhaps he might be the Prophet whom Moses described—the one who would deliver Israel from the bondage of the Romans and establish His kingdom on earth.

Moses stated, in Deuteronomy 18:15, that the Messiah would be a Prophet like him. When we examine the similarities between Moses and Jesus, we understand exactly why Moses said this.

First: Both Moses and Jesus were under the threat of death from their birth.

(Regarding Moses’ birth) So Pharaoh commanded all his people, saying, “Every son who is born you shall cast into the river, and every daughter you shall save alive.”[5]

(Regarding Jesus’ birth) Then Herod, when he saw that he was deceived by the wise men, was exceedingly angry; and he sent forth and put to death all the male children who were in Bethlehem and in all its districts, from two years old and under, according to the time which he had determined from the wise men.[6]

Second: Both Moses and Jesus were taken to Egypt to protect them from the threat of death, as described above. Later, they both came out of Egypt to become the Savior of their people.

(Moses) Then the daughter of Pharaoh came down to bathe at the river. And her maidens walked along the riverside; and when she saw the ark among the reeds, she sent her maid to get it. And the child grew, and she brought him to Pharaoh’s daughter, and he became her son. So she called his name Moses, saying, “Because I drew him out of the water.”[7]

(Jesus) Then, being divinely warned in a dream that they should not return to Herod, they departed for their own country another way. Now when they had departed, behold, an angel of the Lord appeared to Joseph in a dream, saying, “Arise, take the young Child and His mother, flee to Egypt, and stay there until I bring you word; for Herod will seek the young Child to destroy Him.”[8]

Third: Both Moses and Jesus are Prophets of God (able to predict future events). See  “Prophet, Priest, and King,” to see the prophecies that Jesus spoke.

(Moses) “The LORD your God will raise up for you a Prophet like me from your midst, from your brethren. Him you shall hear.”[9]

(Jesus) Then Jesus went out and departed from the temple, and His disciples came up to show Him the buildings of the temple. And Jesus said to them, “Do you not see all these things? Assuredly, I say to you, not one stone shall be left here upon another, that shall not be thrown down.” (Fulfilled in 70 A.D. by Titus, as he destroyed the temple and left “not one stone upon another.”)[10]

Fourth: Both Moses and Jesus are sent by God to be the Savior of their people.

(Moses) And Moses said to the people, “Do not be afraid. Stand still, and see the salvation of the LORD, which He will accomplish for you today. For the Egyptians whom you see today, you shall see again no more forever.”[11]

(Jesus) “And she will bring forth a Son, and you shall call His name JESUS, for He will save His people from their sins.”[12]

Fifth: Both Moses and Jesus acted as Mediators between God and man to satisfy the wrath of God towards the sins of the people.

(Moses) And the LORD said to Moses, “I have seen this people, and indeed it is a stiff-necked people! Now therefore, let Me alone, that My wrath may burn hot against them and I may consume them. And I will make of you a great nation.” Then Moses pleaded with the LORD his God, and said: “LORD, why does Your wrath burn hot against Your people whom You have brought out of the land of Egypt with great power and with a mighty hand? Why should the Egyptians speak, and say, ‘He brought them out to harm them, to kill them in the mountains, and to consume them from the face of the earth’? Turn from Your fierce wrath, and relent from this harm to Your people.”[13]

(Jesus) For there is one God and one Mediator between God and men, the Man Christ Jesus.[14]

But now He has obtained a more excellent ministry, inasmuch as He is also Mediator of a better covenant, which was established on better promises.[15]

Sixth: Both Moses and Jesus were rejected by the people they were trying to save.

(Moses) Then they said to Moses, “Because there were no graves in Egypt, have you taken us away to die in the wilderness? Why have you so dealt with us, to bring us up out of Egypt? Is this not the word that we told you in Egypt, saying, ‘Let us alone that we may serve the Egyptians’? For it would have been better for us to serve the Egyptians than that we should die in the wilderness.” And Moses said to the people, “Do not be afraid. Stand still, and see the salvation of the LORD, which He will accomplish for you today. For the Egyptians whom you see today, you shall see again no more forever.”[16]

Seventh: Both Moses and Jesus are returning to earth a second time.

(Moses) “And I will give power to my two witnesses (Moses and Elijah), and they will prophesy one thousand two hundred and sixty days, clothed in sackcloth (during the seven-year Tribulation).”[18]

When we consider the likelihood that any one person in history could meet the same criteria Jesus accomplished as a Prophet like Moses, we realize that there could be no candidate other than Jesus. As we go through each of these Old Testament Prophecies, the evidence confirming Jesus as the Messiah—to whom these many prophecies are addressed—is unmistakable.

Whatever your own personal need might be today, it is for certain that in Jesus you can find the solutions and help you need. Jesus came to set you free from the burden and problems that sin has caused. He came as a deliverer and overcomer of all of life’s obstacles. All those who put their complete trust in Jesus find that He is everything they need. A personal relationship with the Lord brings complete satisfaction, a great sense of peace, and overwhelming joy.