The sacrifice for the sin offering shall be killed outside of the camp.

Leviticus 16:27 The bull for the sin offering and the goat for the sin offering, whose blood was brought in to make atonement in the Holy Place, shall be carried outside the camp. And they shall burn in the fire their skins, their flesh, and their offal.

Matthew 27:33,35 And when they had come to a place called Golgotha, (outside the city) that is to say, Place of a Skull,… Then they crucified Him...

In the 32nd prophecy that Jesus fulfilled, we see that the sacrifice for the sin offering was to be killed outside the camp.

When Jesus offered up His life for all who are born on the earth, the New Testament records that they took Him outside the city of Jerusalem to a place described as a skull on the highest point of the mountain where the Temple was constructed.

John 19:16-18 Then he delivered Him to them to be crucified. Then they took Jesus and led Him away. And He, bearing His cross, went out to a place called the Place of a Skull, which is called in Hebrew, Golgotha, where they crucified Him. 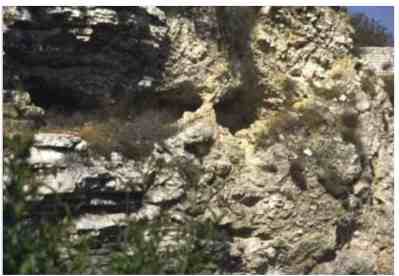  [1]
The Crucifixion occurred on the hill above this stunning image of a Skull.

Paul records in the Book of Hebrews that according to the Old Testament example, the bodies of the animals which were being offered for the sins of those who brought their animals to the priest, took the sacrifice outside the camp. The idea was that this sacrifice for sins was a reproach so that they should not be offered within the city walls.

Hebrews 13:11-13 For the bodies of those animals, whose blood is brought into the sanctuary by the high priest for sin, are burned outside the camp. Therefore Jesus also, that He might sanctify the people with His own blood, suffered outside the gate. Therefore let us go forth to Him, outside the camp, bearing His reproach.

Sin was such an offense to God that He was willing to allow His only Son to die in order to cleanse all those who would believe. Jesus became a reproach for us by being crucified outside the city of Jerusalem.

The idea behind the word reproach is that there is shame connected to the wrong that has been done. The sinner is separated from God by their sin, with no hope of restoration or fellowship with God unless their sin is removed. Sin cannot simply be covered up or ignored; it cannot be forgotten. In order for sin to be removed, the sinner must suffer the penalty required—death.

Jesus did not cover our sin. He did not simply make it possible for God to forget our sins. Jesus’ death paid the price that was owed for the sins we committed. The righteousness of God required that our sins suffer the penalty required. The penalty for sin was death. Therefore, if Jesus would become our sacrifice, He would have to die for us and pay the price we owed God for our sin.

This is why those who believe that they can somehow please God by some sort of good work are mistaken. There are no good works that anyone can do that could ever erase their record of sin. The sins of the guilty must be removed as though they had not been committed in the first place. This is only possible by a sacrifice that is so strong and sufficient that it has the power to completely remove sins and cleanse the heart of those who are being  saved. Only the Blood of Jesus Christ has this power.

1 John 1:7 … and the blood of Jesus Christ His Son cleanses us from all sin.

Hebrews 9:12 Not with the blood of goats and calves, but with His own blood He entered the Most Holy Place once for all, having obtained eternal redemption.

Jesus fulfilled this 32nd Old Testament Prophecy, by being taken outside the city of Jerusalem and dying on the Cross at the place called Golgotha, the skull. There on the cross, Jesus bore our reproach, our shame and our disgrace by taking upon Himself all of our sins. Those who take Jesus Christ as their Lord and Savior, all of their sins are removed and they are made perfect before God, fully acceptable, ready for heaven.

Every person who has placed themselves in Christ Jesus should understand that their disgrace and shame have been removed. They should no longer feel ashamed or alienated from God but instead, have a deep sense of gratitude and love for what the Father has allowed His Son to accomplish, which has made us perfect in His sight.