The hands and feet of the Messiah will be pierced.

Upon our arrival at Psalm 22 verse 16, we have a certain confirmation that David is describing the Crucifixion of a human being. The language: “They pierced My hands and My feet,” is clear enough.

It is interesting that there are no New Testament verses which specifically state that they drove nails into Jesus’ hands and feet. It is by the later testimony of John Chapter 20:25 that we see the disciples knew that Jesus’ hands and feet had been pierced by nails during His crucifixion.

There has been some debate over the correct translation of Psalm 22:16b. Those with a bias against Jesus, the Christian faith, and the Bible—claim that the Jewish Masoretic text has this verse translated as: “like a lion, are at my hands and feet.” Of course this assertion is made for the purpose of disqualifying the entire text of Psalm 22 as a prophecy of the Messiah–fulfilled by Jesus. Critics claim that the text: “they pierced my hands and feet,” is an interpolation by Christians at a later date. In fact, what has occurred here—is the omission of an important verb in the Hebrew Masoretic text that has led to these inaccurate conclusions.[1]

According to Hebrew scholars, the text: “like a lion my hands and my feet,” is lacking the Hebrew verb, Strong’s #3738. כָּרָה (karah).[2]

The Aramaic Targum adds the correct verb, “karah,” and it reads: “they bite like a lion my hands and my feet”.

The Greek Septuagint has ωρυξαν χειράς μου και πόδας, “they have dug/pierced my hands and feet”, which was correctly translated from the Hebrew root: ‏כרה, this conclusion is also supported by the Dead Sea Scrolls, Hahal Hever, 5/6Hev1b f8 9:12), ‏כר[ו ]ידי. “Dig” has been understood in the sense of “pierced,” as in Psalm 40:7/6), hence the rendering in the Syriac (“they have pierced my hands and feet”).

The missing Hebrew word from the Masoretic text: “karah,” is translated seventeen times in the Old Testament as: “dig, digged, digs, cut, cutout, pierced, and opened.”[5]

The objections made by critics of this text have only served to fully define and correct what has been misstated and misunderstood. As these unfounded objections have been made by those who are unskilled in the original languages—scholars in Hebrew, Greek, and Aramaic, have come forward to correct these errors.

In the end—the translation that we have in our English Bible today for Psalm 22:16, is the most accurate rendering of the original language. David clearly was predicting the events of the Messiah in all seventeen prophecies of Psalm 22 (see Prophecy 78).

Important facts regarding how Jesus was attached to the cross:

We know today that the small bones in a human hand could not support a body being held to a wooden Cross. Either they drove the nine-inch spikes into Jesus’ wrists, or they bound His arms to the wooden cross with rope to help support His weight. The place where the spikes were driven into Jesus’ wrists was at the middle of the wrist between the small bones called the “Radial, Ulna, and Carpal Bones.” The effects of placing the spike here is that it severs the Median nerve that supplies feeling and control of the hands.[6] 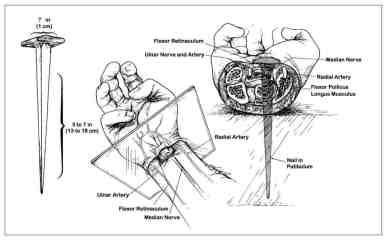 The Roman guards now switched from Jesus’ arms to His feet, securing both feet together with one nine-inch spike through the metatarsal bones. The placement of the nail in this portion of Jesus’ foot would cause a substantial loss of blood from the “Dorsal Petal Artery.”[8]

One of the catastrophes of Crucifixion is that—being nailed to a wooden cross in this manner, with your arms outstretched, has the effect of collapsing the lungs and making it almost impossible to breathe. The only way that a person being crucified can get air into his lungs is to push up from his feet, standing up on the Cross, taking the pressure off the arms, and opening up the lungs. Every time Jesus wants to take a breath of air, He must push His feet down into the cross which has a single spike driven through both feet. Imagine the suffering that Jesus went through in these 6 hours on the Cross.[10]

For a detailed account of what Jesus experienced, see the chapter: The Crucifixion of Jesus.

NOTES: 
[1] Gregory Vall noted that is possible that the LXX translators were faced with כארו; i.e. as in the Masoretic text, but ending with the longer letter vav (ו), rather than the shorter yod (י). This word is not otherwise known in Biblical Hebrew, but could be an alternative spelling derived from the root כרה, “to dig” (Vall, Gregory (1997). “Psalm 22:17b: The Old Guess”. JBL 116 (1): 45–56 [p. 45]. JSTOR 3266745.) Vall proceeds to note nineteen conjectural emendations, (Vall (1997), pp. 50–52) while Brent Strawn appeals to iconographical data in support of the MT reading (Strawn (2000), p. 440).
[2] Ibid, Gregory Vall.
[3] The Dead Sea Scrolls are a collection of 981 texts discovered between 1946 and 1956 at Khirbet Qumran in the West Bank. They were found inside specific caves about a mile inland from the northwest shore of the Dead Sea. David Down, “Unveiling the Kings of Israel.” P.160. 2011.
[4] Charlesworth and others, in consultation with J VanderKam and M Brady. Miscellaneous Texts from the Judaean Desert. DJD XXXVIII. Oxford: Clarendon, 2000.
[5] Genesis 26:25
HEB: שָׁ֖ם אָהֳל֑וֹ וַיִּכְרוּ־ שָׁ֥ם עַבְדֵי־
NAS: Isaac’s servants dug a well.
KJV: servants digged a well.
INT: there his tent dug and there servants

Exodus 21:33
HEB: א֠וֹ כִּֽי־ יִכְרֶ֥ה אִ֛ישׁ בֹּ֖ר
NAS: or digs a pit
KJV: or if a man shall dig a pit,
INT: or If digs A man A pit

Numbers 21:18
HEB: חֲפָר֣וּהָ שָׂרִ֗ים כָּר֙וּהָ֙ נְדִיבֵ֣י הָעָ֔ם
NAS: of the people dug, With the scepter
KJV: of the people digged it, by [the direction of] the lawgiver,
INT: sank the leaders dug the nobles of the people

Job 6:27
HEB: יָת֥וֹם תַּפִּ֑ילוּ וְ֝תִכְר֗וּ עַל־ רֵֽיעֲכֶֽם׃
KJV: the fatherless, and ye dig [a pit] for your friend.
INT: the orphans cast dig over your friend

Psalm 7:15
HEB: בּ֣וֹר כָּ֭רָֽה וַֽיַּחְפְּרֵ֑הוּ וַ֝יִּפֹּ֗ל
NAS: He has dug a pit and hollowed
KJV: He made a pit, and digged
INT: A pit has dug and hollowed fallen

Psalm 22:16
HEB: מְ֭רֵעִים הִקִּיפ֑וּנִי כָּ֝אֲרִ֗י יָדַ֥י וְרַגְלָֽי׃
KJV: have inclosed me: they pierced my hands
INT: of evildoers has encompassed dig my hands and my feet

Psalm 57:6
HEB: כָּפַ֪ף נַ֫פְשִׁ֥י כָּר֣וּ לְפָנַ֣י שִׁיחָ֑ה
NAS: is bowed down; They dug a pit
KJV: is bowed down: they have digged a pit
INT: is bowed my soul dug before A pit

Proverbs 26:27
HEB: כֹּֽרֶה־ שַּׁ֭חַת בָּ֣הּ
NAS: He who digs a pit will fall
KJV: Whoso diggeth a pit shall fall
INT: digs A pit will fall

Jeremiah 18:20
HEB: רָעָ֔ה כִּֽי־ כָר֥וּ שׁוּחָ֖ה לְנַפְשִׁ֑י
NAS: with evil? For they have dug a pit
KJV: for good? for they have digged a pit
INT: shall evil for dig A pit my soul