There is a danger that ensues when people read the comments of those whom they think are experts in New Testament Criticism, as knowing what they are talking about. What we learn after decades of research and study is that a Ph.D does not guarantee accurate knowledge. There are many with advanced degrees who have views of the New Testament that are skewed by prejudice or bias. In the end result, what the New Testament manuscripts say about themselves is the real authority and every conclusion should be made based upon the internal evidence of these manuscripts, not upon the opinions of pundits. 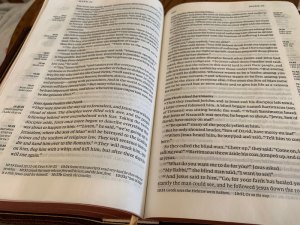 The facts are, there is no “Q” document. This is simply an idea that was created in order to explain why there are different details in the four Gospels for the same events. The idea that Mark wrote His narrative first and Matthew and Luke borrowed from his text, is also nonsense. There is absolutely no evidence that exists to prove this assertion other than conjecture and speculation.

What we do find in a precise examination of the Gospels is that there are four independent writers, describing the same events, from their own unique perspectives. I have written extensively in other articles, describing the forensic evidence that exists in these four separate Gospels that allows us to see that they are independent and separate narratives of the same events.

It is the differences that can be found in multiple witnesses who are describing the same events that proves that what we are reading is truthful and can be relied upon. When we examine the testimonies of Matthew, Mark, and Luke, we find that they are all telling us the same story, but using their own unique words and manner of telling us what they saw and heard. We do see occasions when they use the exact same words or phrases. These most often occur when they are reciting something that they remember Jesus said as a direct quote or an event of extreme importance that was burned into the mind of the writer.

On a majority of occasions, we do not see exact and matching words and descriptions, but what we would expect if we were reading genuine testimony; different descriptions of the same events.

Reading And Studying The Text

In the past year, I have devoted a large amount of time to studying the texts of the four Gospels and comparing them with each other. I have been looking for the differences in word choices and manner of descriptions for the same events. I have been stunned to see that in most of these events, the writers are talking about the same events, but some include details that the others do not. Others omit specific details that are included by the other writers. The writers are using different words to tell us the precise same things.

When one is trained in forensic examination of written texts, they can very quickly learn from what they are reading, whether the witnesses are lying or telling the truth. It is by these differences in written text, while telling the same story, that we can forensically prove that what we are reading is truthful.

When we apply this technique to the text of the Gospels, we find that they pass as genuine testimony repeatedly.

The idea that we must assume the writers of the Gospels relied upon each other, or an unknown “Q” document, is not only foolish, but unnecessary. It is foolish because in order to believe this theory, we must assume many things rather than just examine the text ourselves and evaluate what we see. Unnecessary because a forensic examination of the Gospels, proves they are independent and truthful narratives.

I invite the serious student of the New Testament to do a side-by-side comparison of the texts of the Gospels and see how each uses different words, descriptions, omit some details and include some details, but all tell us the precise same story.

These four Gospels tell us that a man appeared on earth as a baby, grew into manhood, claimed to be God and Messiah, performed miracles to prove He is God, fulfilled all the Messianic Prophecies to prove He is Messiah, was crucified, died, rose again on the third day, and was seen by over 500 eyewitnesses. All of these things, in direct fulfillment of over 400 Messianic prophecies that were written for the Messiah, up to 1,450 years before Jesus appeared on earth.

The New Testament is a reliable written narrative of truthful events, because this is what the forensic evidence that we have, proves they are truthful. The ideas that we can examine and scrutinize these texts by unknown or unprovable sources and the ideas of men, is folly and does not convey to the world the true facts of what actually happened in Israel 2,000 years ago when Jesus came to earth and claimed to be the only Savior of the world.