A Challenge To Debate For Pot Pie Apologist

Often I find many interesting debates on my Twitter feed from many intelligent atheists and other critics of God and the Bible. On occasion, I find a person who is all talk, but unable to provide actual evidence to support their assertions.

This person, who uses the alias: “Pot Pie Apologist,” has repeatedly stated that other scholars have proven that the Gospels of Christ were written late in the first century, by non-eyewitnesses. I asked this person to provide the actual evidence that these other scholars have included with their statements to prove these claims are true.

Not once has this critic provided any evidence. Instead, this person has resorted to one of the oldest tactics used by a challenger in a debate, when they cannot impeach the arguments of their opponent; to turn and attack the opponent personally.

When a critic is unable to provide the requested evidence, or cannot refute their debate adversary, they look for a reason to attack their adversary personally, in order to deflect the attention away from the real issue: they don’t know the answer, or cannot provide the evidence.

I am challenging this critic; Pot Pie Apologist, to a public debate here at my web site, so that we can have the required space to adequately write our arguments and impeachments.

If Pot Pie Apologist does not accept my invitation to debate, I will know, as well as all others, that this person does not have the ability to defend the late-date writing of the Gospels, written by non-eyewitnesses.

If you accept my invitation, Pot Pie, and are able to provide the requested evidence, not in a link, but by your own written words in the form of a comment at the end of this post, then I will answer you and we can settle this matter. If you do not, I will know that you cannot impeach the Gospels because there is no evidence to do so.

The Following Is The Response From Pot Pie Apologist: 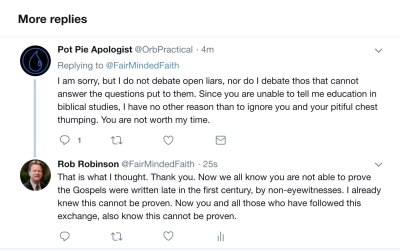 ‹ You Are My Witnesses: The Men Who Saw Jesus
A Challenge To Debate For Counter Apologia ›