Sunday, “Defense Secretary James Mattis warned Pyongyang against aggression against the United States or its allies, saying it would trigger a unified world response and what he termed the “total annihilation of a country, namely North Korea.” 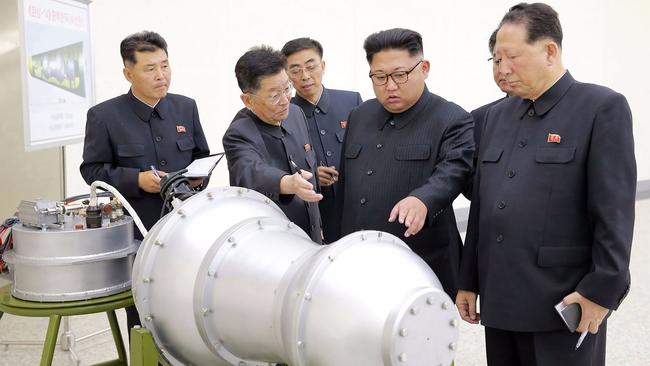 Many have asked if this crisis with North Korea is reason to be watchful for the return of Jesus Christ. Certainly Jesus intended that those who love Him would be ever watchful for His return, particularly when events are taking place around the world that Jesus said would take place just before He arrived.

The possibility of a global Thermonuclear War would necessitate the intervention of God. There are many prophecies of the Messiah that Jesus must still fulfill which would preclude the event of a war that could destroy most of the people on earth.

During the last 31/2 years of the Great Tribulation, there are descriptions in the Book of Revelation that indicate a nuclear war, but this event cannot take place until after Israel is under a seven year peace treaty and the antichrist has been introduced.

This leads us to examine other important events that have recently taken place in the world and those which are just ahead. We are entering an extremely important time of the year when the Feast of Trumpets, or Rosh Hashanah is about to begin. Many writers like myself, believe that Jesus will return during the Feast of Trumpets, for His church. This is due to the fact that when Jesus arrived on earth the first time, He perfectly fulfilled the Feasts of Passover, Unleavened Bread, First Fruits, and Pentecost. Jesus fulfilled these Feasts of the Lord on the precise days and in the precise ways that they were required to be fulfilled.

Jesus is called “The Lamb of God who takes away the sins of the world,” a fulfillment of Passover, dying on the exact day that Passover occurred. Jesus, the “Bread of Life,” lay in the tomb upraised as the Feast of Unleavened Bread took place. Jesus rose from the dead three days later on the Feast of Firstfruits, in which Paul later described Jesus as “The firstfruits of all those who will raise from the dead.” Jesus ordered the disciples to remain in Jerusalem and wait for “the promise of the Father.” Exactly 50 days after Passover, on the Feast of Pentecost, Jesus sends the Holy Spirit to the Disciples and fills them on that day.

From Pentecost to Trumpets there is a four month “harvest” period in which all the crops are brought in. Jesus said that we should “lift up our eyes and see that the harvest is great,” obviously describing this time of history when God is harvesting human souls during a period of Grace. When the harvest is concluded, a trumpet is sounded and all God’s people are gathered together into one place. This is the Feast of Trumpets, when the Rapture will likely occur. This event takes place in 2017 on Wednesday September 20, thru Friday September 22.

After Trumpets, the Day of Atonement begins, a likely reference to the beginning of the seven year Tribulation. At the end of the Tribulation Jesus will return with His church, as described in Revelation chapter 19, and immediately set up the kingdom of the Messiah promised to David. This rule will last for 1,000 years. At the end of this time, Jesus said that He would destroy the heavens and the earth and recreate them, perfect. This will conclude the plans and purpose of the Messiah for the redemption of mankind on the earth.

The present conflict with North Korea, a marked rise in lawlessness that we se all across the earth, evil and violence that has taken place, and overall hatred of God, the Bible and those who love Jesus, are all certain signs that Jesus return is very near, even at the door.

For more information on the Seven Feasts of Israel and the Tribulation Period, please see the following articles on this site:

Like Loading...
‹ The Annihilation of North Korea
You Can’t Buy Happiness, But You Can Buy Books And That’s Kind Of The Same Thing ›

Categories: Dead or Alive, North Korea Nuclear Capability, Robert Clifton Robinson, The Battle of Armageddon, The Last Days, The Second Arrival of the Messiah, The Sound of a Trumpet, The Time and Season of Jesus Return

Tags: Events surrounding the Rapture, North Korean Crisis, The beginning of the Tribulation, The return of Jesus