The Lost Letters Of Christ Are Lies 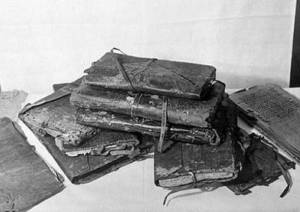 A recent discovery of alleged Jesus’ secret teachings to his ‘brother’ James unearthed by scholars in Oxford are a part of the original discovery from Nag Hammadi. These letters are known Gnostic documents that were created by a group who seek to corrupt the truth of the Gospels of Christ and make Jesus something far different from who is portrayed by the New Testament.

Before the canonization of the New Testament, there were some 30 gospels of Jesus Christ that were under careful consideration. All but Matthew, Mark, Luke, and John, which are a part of our New Testament today, were excluded—after having been examined thoroughly for accuracy and authenticity. Scott Kellum writes:

Their individual status as Scripture is usually not debated. …There are about 30 known Gospels that appeared before the year 600.”⁠[1]

The primary reason that many other alleged gospels of Jesus were not added to the cannon of the New Testament, is due to the diligence of men of the first century, chosen by God, to preserve the accurate text of the New Testament. It was well known prior to the canonization of the New Testament, the particular documents which contained inaccuracies. This is due largely to the knowledge of the true accounts of Jesus life and ministry which were written before 90 A.D, and very likely before the fall of Jerusalem in 70 A.D. In every case, all conflicting documents which are today put forth as alternatives to the four gospels, were written at a time of great distance from the original four gospels.

All of the Gnostic gospels of Jesus, the most prominent of which—the Gospel of Thomas—was found with many other Gnostic texts, written in the third or fourth century.[⁠2] The body of these texts are described as the “Nag Hammadi,” from the location of their discovery along the west bank of the Nile river, 60 miles north of Luxor.[⁠3] Containing some 49 documents in three papyrus codices, none of the texts from these later writings which describe Jesus’ work and ministry—add to our understanding of the four gospels that were written before the end of the first century. In fact—they are in conflict with the writings of the four gospels which were complete by 90 A.D.⁠[4]

Scholars Kellum, Köstenberger, and Quarles commented on the canonization of the gospels in their treatise, “The Cradle, the Cross, and the Crown.”

“It was not too long after Jesus’ earthly ministry that the Synoptic Gospels were written (most likely, all before the fall of Jerusalem in AD 70). Originally, the four Gospels disseminated independently of one another.”[⁠5]

All other documents not canonized, which purport to contain information regarding the events of Jesus and His ministry, were proven unreliable and inaccurate by the scholars of the first century. These men had far greater ability to determine the authenticity of the documents which should be included in the New Testament, than any modern scholar today.

It is interesting that critics of the New Testament who assert that the four gospels were written at to great a distance from the events to be considered reliable, now make so much effort to support the Gnostic documents found at Nag Hammadi, written 4-500 years after Jesus was crucified and resurrected. The reason that the four Gospels are reliable and these called “The Lost Letters of Christ,” are not is due to the scientific validation that Matthew’s gospel has now been dated at 60 A.D. and penned by his own hand. [6]

The former assertion of unreliability that was once leveled against the four Gospels and was used to try and disqualify them as reliable is now useful to disqualify the Nag Hammadi manuscripts.

The Lost Letters of Christ are a part of the Gnostic attempt to diminish Christ and make Him something far less than He actually is. Gnosticism denies that Jesus is God as is clearly evidence by the words of Jesus Himself and the narrative of the New Testament. If Gnostics were correct then Jesus’ death on the cross for our sins did not take place because He is just a man. No man could possibly die for the sins of the world and accomplish our eternal salvation. From this basic concept of Gnosticism, diminishing Jesus true identity as God, lies the danger of all Gnostic teaching, which includes the Lost Letters of Christ.

The Jesus of the New Testament Gospels is the fulfillment of all the Old Testament prophecies of the Messiah. He is God in the flesh, come to earth in the form of a man, dying for the sins of the world. The Gnostic agenda seeks to make Jesus something He is not and take away His power to forgive sins.

The Apostle John wrote prior to the end of the first century when Gnosticism was being used to try and change Jesus from God to a simple man, that those who teach these things are liars.

All Gnostic teachings, including all those from theNag Hammadi, to include the recent discovery of the “Lost Letters of Christ,” are lies and do not represent the true Jesus as described by the four Gospels of the New Testament.

Like Loading...
‹ Galapagos Finches Did Not Become A New Species
Why It Is Illogical To Debate The Assertion Of Atheism: “There Is No Evidence For God” ›