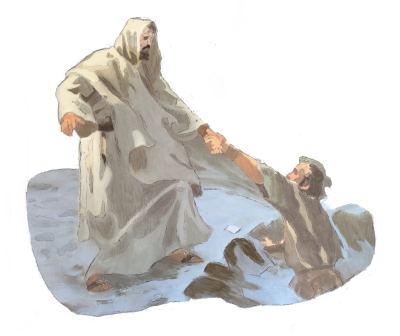 In Colossians Chapter 1, Paul presents us with the most important facts regarding the origin and nature of Jesus. Defending against the errorists of Colosse, Paul defines their depreciation of Jesus as unfounded and unprovable. Jesus is presented to us as the triumphant Redeemer in whom all authority in both heaven and on earth reside.

In Ephesian 1:20-23, and Philippians 2:5-11, Paul echos a similar declaration of Colossians chapter 1, that Jesus is the image of the invisible God.

The Supremacy Of Christ

In the minds of the Colossian errorists who viewed a system of angelic mediators as superior to Jesus, Paul asserts the superiority of Jesus and His death for all sins as the preeminent solution to all of man’s difficulties.

15 Jesus is the image (gr. eikon) of the invisible God, the firstborn over all creation. 16 For by Him all things were created that are in heaven and that are on earth, visible and invisible, whether thrones or dominions or principalities or powers. All things were created through Him and for Him. 17 And He is before all things, and in Him all things consist. 18 And He is the head of the body, the church, who is the beginning, the firstborn from the dead, that in all things He may have the preeminence. ~Colossians 1:15-18 (NKJV)

Paul declares and defines Jesus as the “image of the invisible God.” Image is translated from the Greek word, “Eikon,” meaning the likeness, or a thought that is brought out into the open. Jesus is the image of God in the sense that He is the exact likeness of God. There is no difference between what we see in Jesus as He is described in the New Testament and the person of the Eternal God (John 1:1, Hebrews 1:3).

The second idea that is being communicated to us here is that Jesus is the image of God in that His nature and being are identical to God. In John 1:18, the Apostle describes Jesus as One with the Father, one and the same. For this reason, we can have confidence in Jesus that when we place our trust only in Him, we are placing our hope and assurance in the One True God who made all that exists and who loved us enough to come to earth and die for our sins.

This clarification by Paul, impeaches the Gnostic system of vague emanations and shadowy abstractions of the unseen God. Jesus told Philip that “if you have seen me, you have seen God” (John 14:9-11). Jesus’ appearance on earth, dying for the sins of the world, raised to life on the third day, is the physical proof that God exists and He loves us.

Paul continues his clarification that Jesus is the “firstborn over all creation.” This is from the Greek word, “Prototokos,” meaning first in rank or importance. Jesus arrival on earth was not as the firstborn Son of God in the sense that He was a created being. Jesus existed forever as God and determined to set aside His rights as God (Philippians 2:5-11), and take the body of a man so as to offer His perfect and sinless life for us. Parallel passages in confirmation of these facts are also found in Romans 8:29, Hebrews 1:6, and Revelation 1:15.

We can have great confidence today that the One in whom we have placed our trust, is the One True God; who loved us before the foundation of the world and came to earth as God dwelling in the body of a man—to die for us and redeem us back to God.

Jesus is God, presented to the world in the body of a man who lived a sinless life and presented this perfect life to God on our behalf. As all are made sinners by Adam’s sin; all who trust in Jesus are made righteous by His perfect and sinless life, death, and resurrection, which makes-perfect, all those who trust in Him.

In Colossians 1:14, Paul clarifies that Salvation is found only in the Son of God, not in a church, a religion, or any other method or means of man. God imparts salvation to anyone through their union with Jesus.

The english word “Redemption,” was translated from the Greek, “Apolytrosin,” which describes a release of guilt brought by the payment of a price. This term was often used in ancient cultures to describe the deliverance of slaves from their captivity. This is fitting in that sin is defined as enslaving the world. Jesus death and resurrection broke the chains of sin’s power and freed all those who place their trust in Him.

The Greek word used in this context for “Forgiveness,” is “Aphesis,” which means to send away. By our trust in Jesus’ death and resurrection our sins are removed as if they never existed. It was our sins that separated us from God. Now that we have no sin because of Jesus death for those sins, we are perfect in the sight of God and perfectly ready for heaven. No sinner can live in heaven because their sins would cause them to be consumed by the light of God’s holiness.

In order to live with God in heaven, our imperfection must be removed (sin), thereby making us perfect and able to live in the presence of God. It is a great act of God’s mercy that He does not take us to heaven in our present state. If He had done so, we would all be instantly consumed.

Through the Lord’s mercies we are not consumed, because His compassions fail not. ~Lamentations 3:22 (NKJV)

Redemption and forgiveness are not exactly parallel or identical concepts. One is necessary with the other, in order for us to understand what Jesus has accomplished for us. Jesus’ perfect life offered for us, paid the debt we owed for our own sins, but also sent away our sins so that they no longer exist.

Salvation Is A Present Possession

In Colossians 1:13-14, Paul defines our salvation that was made possible by Jesus’ death and resurrection, as a present possession that every person who trust in Christ, has right now.

13 He has delivered us from the power of darkness and conveyed us into the kingdom of the Son of His love, 14 in whom we have redemption through His blood, the forgiveness of sins. ~Colossians 1:13-14 (NKJV)

Jesus has “conveyed” us into the Kingdom of the Son God loves. The Greek word here, “Metestesen,” defines the english word, conveyed as the removal of persons from a temporary country, into a new land where they will abide forever. What may be surprising to some is that those who have trusted in Jesus for their salvation, are already citizens of Heaven. It is earth that we are temporarily abiding. For the Colossians, Paul emphasized that this was their present reality, not a distant hope.

Metestesen also defines the time of our dwelling in heaven as already having taken place. From the moment we first determined to turn from our sins and trust Christ for our salvation, this salvation became a present possession.

As Christians today, we get so caught up in this present world that we often forget that we are only visitors here on earth. Our home, our citizenship, our permanent residence, is Heaven. In the eternal sense from where God views all things, we are all already there in Heaven together. All things in heaven do not go through the process of time, everything has already happened. When we arrive in heaven after our death, we will discover that we were already there from eternity. “Known to God from eternity are all His works” (Acts 15:18). This reality is nearly impossible to understand in our present mortal form, but nonetheless, this is the reality of what scripture declares.

The reason that Jesus is defined by the Bible as the only way to heaven, is due to the supremacy of Christ over all creation. No other god or religion has a Savior like Jesus.

Colossians declares a certain and singular Jesus who is the Eternal God, the only One capable of saving sinners. These facts and requirements are declared for us throughout the Old Testament, and documented as fulfilled by the narratives of the New Testament. Jesus is God and He has proved His existence by coming to earth and demonstrating all the powers, qualities, and nature that we would expect from an Eternal, loving God.

‹ A Battle For The Last Days: Turkey, Syria, Trump and Erdogan Line Up With The Prophecy Of Ezekiel 38-39
Pope Calls Statues ‘Pachamamas’ And Apologizes For Their Removal From The Church, But Not Quite ›

Categories: Agnostics and Skeptics, Defending the Gospel, Forgiveness of Sin, God with us, His Compassion, How Salvation Occurs, Jesus Cross and Wisdom, Jesus is God, Justice, Justification, Reliability of the New Testament, Robert Clifton Robinson, The Historical Jesus, We must repent, We must see our need, What is required for Heaven?, Why Jesus had to die

Tags: Does God exist?, Evidence For God, Jesus as God