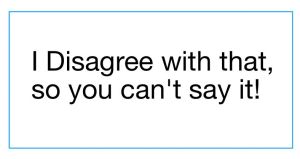 Today, we live during a period of history when the rights and freedoms afforded to all Americans by the First Amendment are being eroded and redefined.

“Congress shall make no law respecting an establishment of religion, or prohibiting the free exercise thereof; or abridging the freedom of speech, or of the press; or the right of the people peaceably to assemble, and to petition the government for a redress of grievances.”

There is a group of individuals who are offended by what certain people say or write and therefore assert that those who express themselves in offensive ways, should be silenced. The problem with this view of speech is that the people who make these claims, selectively choose what is offensive and what is not. Essentially, anything that you write or say that they do not agree with, is deemed offensive language and should be censored.

If this definition of free speech was, in fact, the intention of those who framed the Constitution of the United States, then the First Amendment was written incorrectly.

There are no stipulations in in the First Amendment as to what constitutes free speech, only the right of those who wish to speak, to express themselves—with the words that they choose. This right cannot be impinged by anyone.

The question as to whether or not your speech is protected on a private web site, is still being debated. Currently, when you visit a news web site, Facebook, or any other privately owned internet web site, the owner can censor your comments or delete them altogether. It is clear that Facebook, WordPress, and other large public sites, do not currently censor most comments in an effort to allow diversity, discussion, and the right of free expression. This is a very smart move and one which is proven to be advantageous in growing and expanding an internet presence. People want to know that they can express their opinions and not have their comments deleted.

I own several web sites in which a person may make comments or observations about what I have written. I have decided that I will not delete any comments, regardless of their content. I want to allow everyone the right to say whatever they wish to say, regardless of their words or intent. The readers who see these articles and comments can determine the relevance of these words for themselves. I find that allowing everyone to speak freely, allows the readers to see what kinds of people there are in the world and the great diversity of thoughts. A reasonable and intelligent person will look at an article and read the comments that are made and be able to see which views make sense and those that are unreasonable or biased.

When being offended is the criteria for elimination of a comment, everyone looses

It is of particular interest in evaluating the Selectively Offended, that a large majority of language that is censored today by government, news agencies, and secular organizations, is from Christian sources. A person who is a follower of Jesus Christ, who makes a statement about their faith, or seeks to encourage another person to consider Jesus Christ, will often find that their expressions are offensive to those who do not wish to hear or read these types of comments. Because someone might be offended, the speech of those who express their faith is often deleted. In some cases, internet sites will ban these users altogether.

If we examine the opening portion of text in the First Amendment to the Constitution, we find that one of the primary purposes for this amendment, is to afford any religious person the right to say whatever they want to say about their faith. Certainly the founders of our nation understood the clear command of Jesus to “go into all the world and preach the gospel to every creature,” would necessitate a law that would protect their speech. The right to speak publically about Jesus Christ was a primary reason that men and women left Europe and came to the new land of America, in the first place. The men who approved the text of the First Amendment understood that Christians or other religions, would need protection from government and hostile parties who would seek to stop their expression of faith; and this was a primary reason for the language of the First Amendment.

Although many opponents of religion frequently use the establishment clause of the First Amendment to stop Christians from expressing their faith on any government property, building, or gathering, they leave out the “prohibition” clause which allows anyone to practice their religion in any manner that they choose, without being impeded by government. In truth, Thomas Jefferson never intended that a “Wall” should be erected that prevented the influence of religion on government. His intent was to prevent government from inhibiting any religious person from practicing their faith, without interference from any person or agency of man. It is clear in the early writings of the Founding Father’s that their faith in Jesus Christ, provided a powerful influence upon the establishment of liberties that are contained within the Constitution and the Bill of Rights.

The practice of morality being necessary for the well being of society, He [God] has taken care to impress its precepts so indelibly on our hearts that they shall not be effaced by the subtleties of our brain. We all agree in the obligation of the moral principles of Jesus and nowhere will they be found delivered in greater purity than in His discourses.[1a] —Thomas Jefferson

[C]an the liberties of a nation be thought secure when we have removed their only firm basis: a conviction in the minds of the people that these liberties are of the gift of God? – that they are not to be violated but with His wrath?[1b] —Thomas Jefferson

Unless people of all faiths begin to write, speak up, and petition the government regarding the preservation of the first Amendment, this erosion of religious liberty, guaranteed by the First Amendment will be lost to future generations.

If any person sincerely believes that a person should be prevented from expressing their faith, opinion, or disagreement over any particular statement, simply because someone might be offended, they have missed the entire premise of the right of free speech.

We might not like what someone has to say. We may disagree with the words that a person may speak about any particular subject. Every person should have the right to express their feelings and opinions—without censor, edit, deletion, or impediment, from government or any other agency or person.

When we allow a news company, state or federal government, university, school, private business, or internet site to deprive us of our Constitutional right to express ourselves by our speech, we have contributed to the increasing problem of speech discrimination.

It is time to tell those who are offended by so many things to grow up, grow a thicker skin, accept and allow that people have the right to express themselves, and let them say whatever they want to.

No one should ever be prevented from speaking, about any subject, simply because someone is, or might be offended.

The sooner that our nation gets over its selectively offensive response to things they do not agree with and accepts the fact that people have a right to say anything they want to say, we will be a stronger and more free nation. If we don’t like what someone says or believes, we can write a comment, or chose not to read their words. It benefits all people, when everyone has the right to say or write the thoughts, feelings, or belief that they have. These words allow us to see the world in the bigger picture, instead of creating a world in a bubble that is insulted from reality.

Why I Do Not Post Comments on ABC, CBS, CNN, NBC, or MSNBC News Sites
Washington Post Censures Comments By Christians
The Bible As The Basis For All Human Laws
The Words of 52 Christian Men Who Founded the United States of America
America’s Spiritual Heritage
The Founding of America as a Christian Nation
America’s Spiritual Heritage and the Influence of the Bible on America
Blackstone’s Commentary on the Law
Gay Marriage is the Law of the Land; So Also is the Right of Free Speech
When America Abandons God: The Signs And The Consequences

‹ Winning The War On Christmas
I.S.I.S Comes to Steal, Kill, and Destroy: The Reason and Source of Terrorism ›

Tags: Christian comments deleted, Christian Speech and the First Amendment, Gay marriage and the first ammendment, I am offended by that, Thomas Jefferson and the "wall"